All Nations Welcome Except Carrie 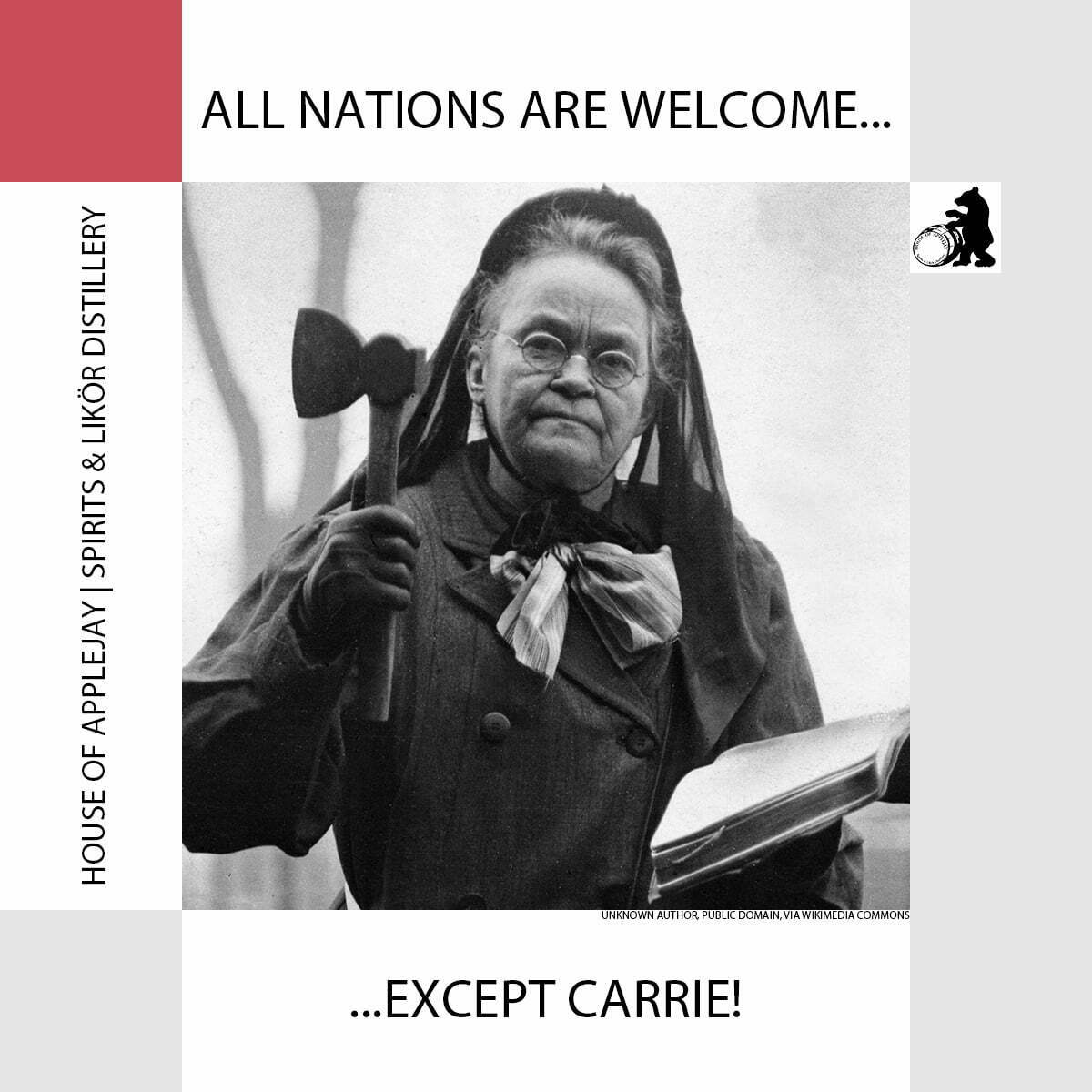 Carrie Amelia Nation (1846 -1911) was an American activist mainly in Kentucky, Kansas, Oklahoma and Missouri. She was a radical member of the US temperance movement, and organized the local branch of the Woman’s Christian Temperance Union (WCTU) in Kansas. She campaigned for compliance with state liquor laws, and was a proponent of women’s suffrage. Carrie opposed alcohol and promoted the idea of Prohibition in America. She was especially known for her controversial tactics attacking saloons with a hatchet, and was nicknamed “Hatchet Granny” thereafter.

Kansas had prohibited alcohol in 1880, thus the law was not enforced. This made Carrie to take the law into her own hands. The movement started in December of 1894 when she and like-minded women who called themselves “Home Defenders” raided the local pharmacy in Medicine Lodge, Kansas. They found a barrel of whiskey, wheeled it out into the street, and set fire to it. In the following years the group attacked several bars and liquor selling establishments throughout the State.

In December of 1900 the women destroyed the ornate bar at the Carey House Hotel Bar in Wichita, Kansas. It was the first time that Carrie used a hatchet which should become the signature symbol for the prohibition movement. The story goes that Carrie’s husband mockingly suggested she may use a hatchet to do more damage. Over the next years she would attack saloons throughout Kansas, and was arrested about 30 times for “hatchetations“. The women were marching into saloons singing and praying while smashing bar fixtures and bottles with bats and/or hatchets. Her saloon-smashing crusade made her famous, and she used her publicity to market her political ideas.

Another story took place in a Guthrie saloon in Oklahoma when saloon owner Moses Weinberger invited Carrie Nation to speak in his “Same Old Moses Saloon”. Carrie had to pledge not to do any hatchet swinging afterwards, she had to spare his place from destruction. Upon her leaving though Carrie could not tempt herself and swung her hatchet chopping out a piece of the Mahagoni bar scarring it for life. Weinberger used this incident to market the event and hang a sign reading “All nations welcome—Except Carrie.” This slogan was soon copied to all of Weinbergers saloons, and it a nearby saloon in Lawton, Oklahoma put up a billboard-size sign with this message. In the following years it should become a popular sign in saloons reminding their guests of their privilege to drink without Carrie Nation.

Carrie Nation died only a year before women gained the right to vote, and nine years before Prohibition began in the United States.

← Vital Du Four The Thicket →
Back to blog