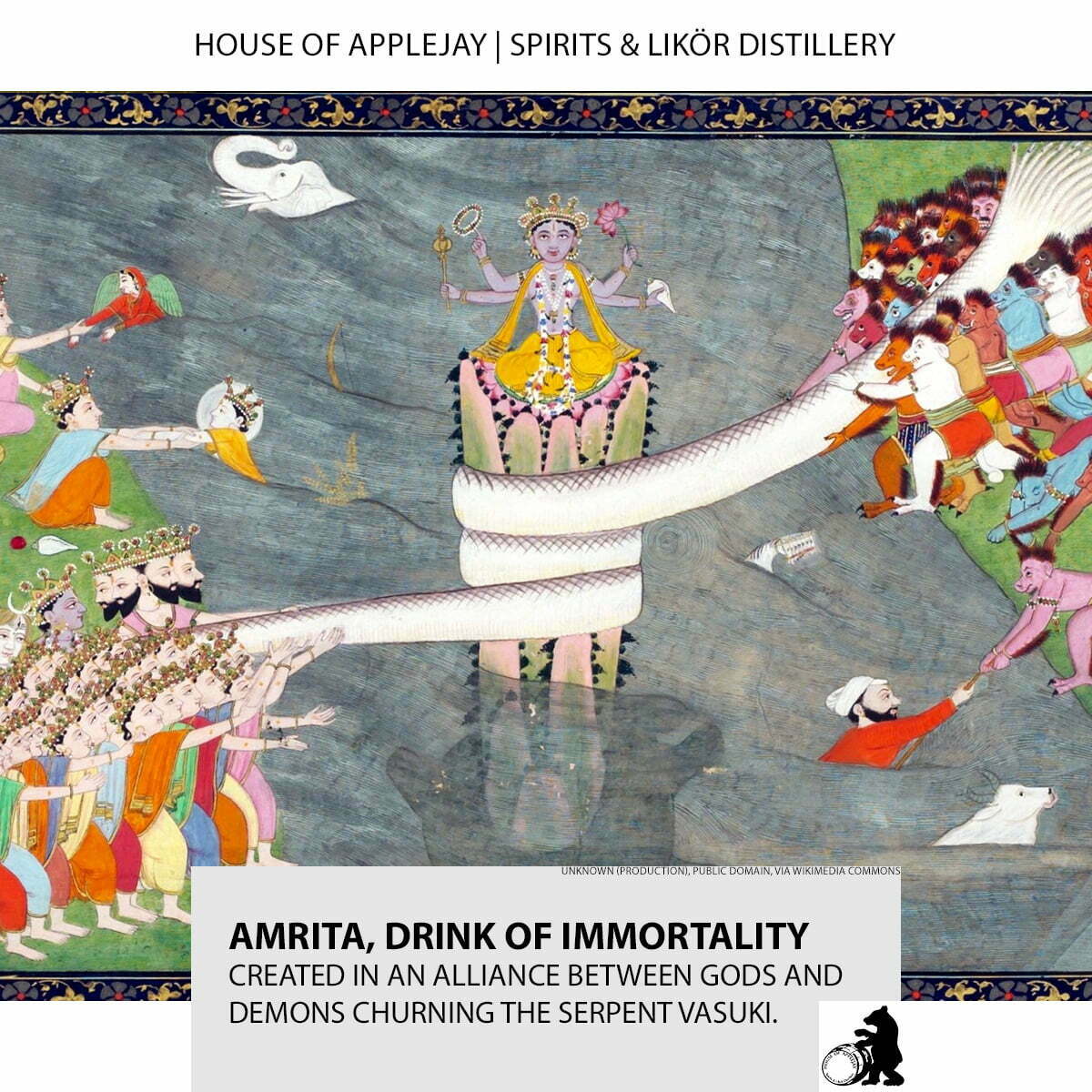 Amrita is a life-prolonging potion of the gods described in the ancient Indian Vedas. Other known names for Amrita are Soma or Madhu. In addition the term Amrita is also used in the actual sense of the word for immortality.

In Hindu mythology, Amrita is described as an elixir with extraordinary life-prolonging powers and as well as a magic potion of safety from mortal danger. In the myth of the churning of the ocean of milk (Kshira Sagara), the serpent Vasuki (Ananta-Shesha) winds around the world mountain Mandara (Meru) at the command of Vishnu and Brahma. The tortoise Kurma (incarnation of the god Vishnu) takes the mountain on her shell and both gods and demons set the mountain in rotating motion by pulling on the serpent Vasukis. After a long whisking, a beautiful woman (Lakschrni) in yellow-gold robes rose out of the foam, carrying in her right hand a bowl made of a single precious stone: in it was Amrita, the drink of immortality. The gods (devas) began to drink the Amrita, without sharing it with the demons (asuras) which caused a battle between gods (devas) and demons (asuras), in which the gods were finally victorious. In the following, Amrita is referred to as the drink that the devas (gods) drink to obtain immortality.

About the production of Amrita only indications are known: It is implied in the hymns of Rigveda that Soma (Amrita) is made from a plant that grows near or in rivers or lakes. It is a mountain plant with flowers that are probably yellow or gold, from which the golden color of the Armita could be explained. The plant is likely larger like a bush or tree as the priests crush “its many limbs” to pour out the precisous juice. The priests mix the juice of the plant (usually alone or in some cases with other ingredients) with cow’s milk to make the (Soma) Amrita drink.

Some parts of India use today the Sarcostemma Acidum plant as the Soma plant, which is said to have healing properties. However, the sap of Sarcostemma is described in Indian Medicine as toxic, bitter, acrid, cooling, alterant, narcotic, emetic, antiviral, and rejuvenating.

← Tarascoe Mezcal Georgia's Brandy from Corn Stalks →
Back to blog