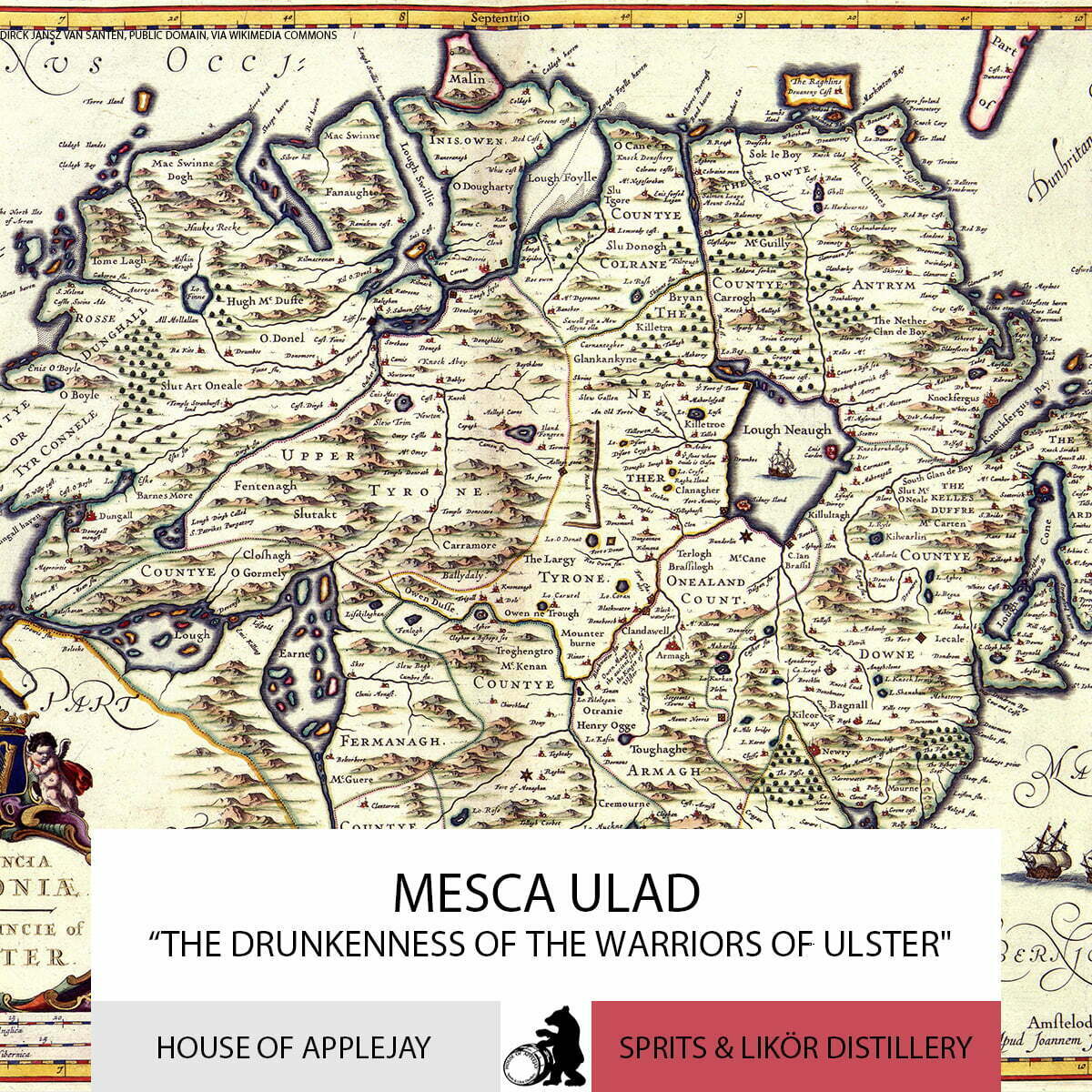 Mesca Ulad or ‘The Drunkenness of the Warriors of Ulster” –  is a tale from Irish mythology first written about in the 12th century A.D.. The first part of the tale is written in Middle Irish in the Lebor Laignech (‘The Book of Leinster”), the second part is in Old Irish in the Lebor na hUidre (“The Book of the Dark/Dark Colored Cow“). The Leabhar Buidhe Lecain (‘The Yellow Book of Lecan”) and a 16th-century Scottish manuscript combines both parts of the tale Mesca Ulad.

The tale is about King Conchobar mac Nessa who persuades his two foster sons, Fintan and Cú Chulainn, to let him rule the kingdom of Ulster alone for a year. Fintan and Cú Chulainn each owned over a third of the dominion and agreed to it. After the year ended, both sons wanted to hold a big festival for Conchobar on the same day. Being committed to both equally, Conchobar decided to party first at Fintan’s and then at Cú Chulainn’s for the second half of the night. As they all drunkenly drive their chariots from Fintans to Cú Chulainn’s castle, the party gets lost in the darkness of the night. By mistake, they take a wrong turn and arrive in the dominion of the hostile king Cú Roí. Cú Roí welcomes the drunken guests and invites them to eat in an iron house covered with wood paneling. Upon their entry he betrays them and locks the house with chains trapping them. Cú Roí then orders to set the house on fire but with Cú Chulainn’s help, the Ulster are able to break the chains, save their lives and destroy Cú Roí’s castle, Temair Luachra.

Social drinking played an important role in the Celtic culture. Especially the Irish were fond of drinking mead and beer. It was common and desirable to drink to the point of drunkenness (mescae), and even so to the point of “confusion of the ale house” (cumascc cuirmthige) including arguments and fights under the influence.

“The nation is greedy for wine, also knows how to prepare many kinds of wine-like drinks. Some of the common people run around in voluntary frenzy with unsteady gait drunk all the time.”