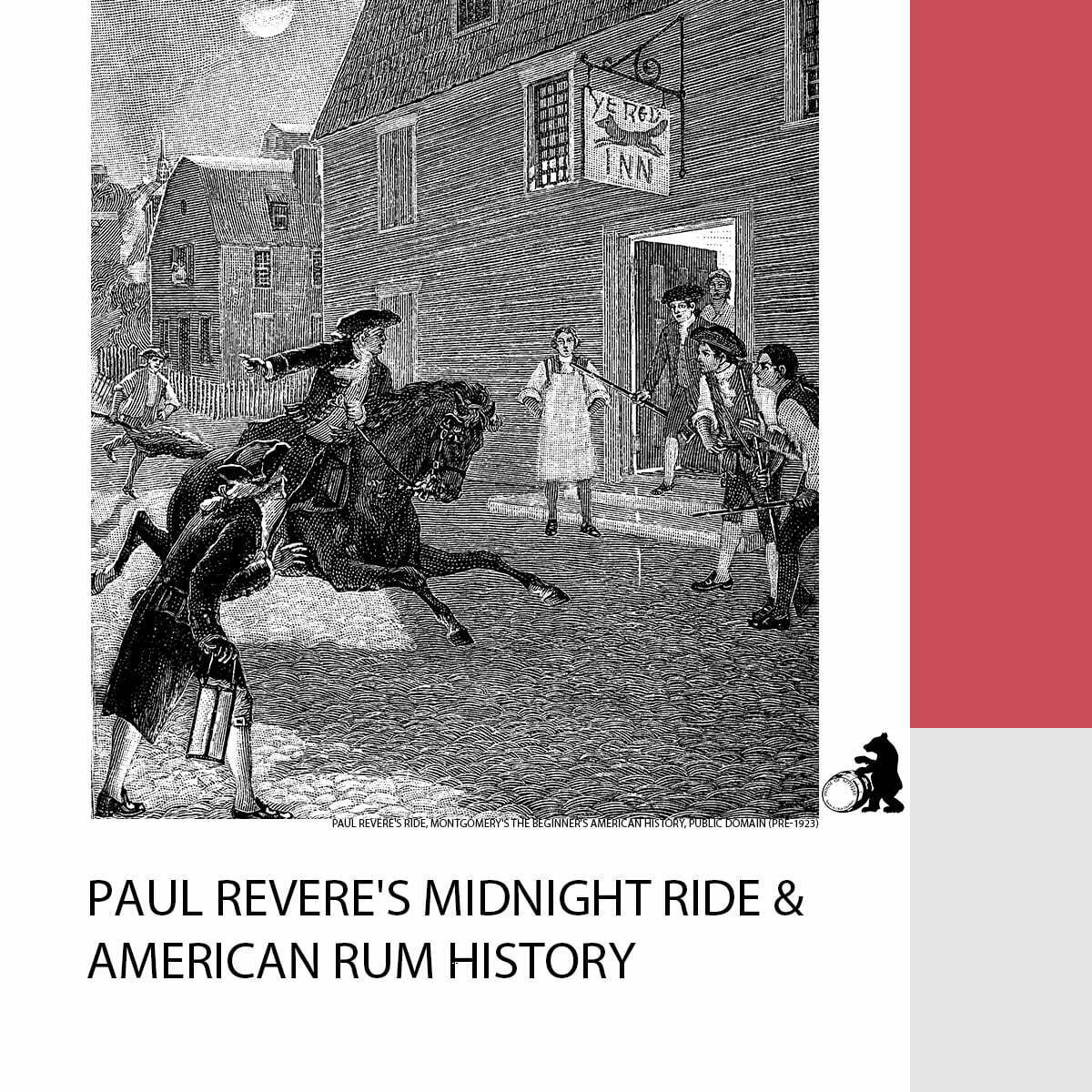 Paul Revere’s Midnight Ride is mostly known as the alert to the American colonial militia in April 1775 that “The British Are Coming!“.

Less known is the story that claims Revere consumed quite an amount of rum that night. According to author Wayne Curtis, Revere stopped over at Isaac Hall’s house in Medford, MA. The city of Medford was home to four family operated rum distilleries which were engaged in the trianguar trade. Revere’s friend, Isaac Hall, was known to support the American militia and Hall’s family build the first distillery located on the northern side of Riverside Avenue between Medford Square and River Street. The John Hall distillery was known for producing excellent rum that was operated in 1775 by Benjamin Hall Sr., Isaac’s brother. So, it is very well possible that Revere drank a few glasses of rum before getting back into the saddle warning his fellow Americans of the impending invasion.

This is just one story in American history that emphasizes the importance of American Rum production for our Nation. We endorse AmBRu Campaign, an organization seeking to protect American Rum (and American Brandy) as historically important products of the United States of America.

Listen, my children, and you shall hear
Of the midnight ride of Paul Revere,
On the eighteenth of April, in Seventy-Five:
Hardly a man is now alive
Who remembers that famous day and year.

He said to his friend, “If the British march
By land or sea from the town to-night,
Hang a lantern aloft in the belfry-arch
Of the North-Church-tower, as a signal-light,—
One if by land, and two if by sea;
And I on the opposite shore will be,
Ready to ride and spread the alarm
Through every Middlesex village and farm,
For the country-folk to be up and to arm.”

Then he said “Good night!” and with muffled oar
Silently rowed to the Charlestown shore,
Just as the moon rose over the bay,
Where swinging wide at her moorings lay
The Somerset, British man-of-war:
A phantom ship, with each mast and spar
Across the moon, like a prison-bar,
And a huge black hulk, that was magnified
By its own reflection in the tide.

Meanwhile, his friend, through alley and street
Wanders and watches with eager ears,
Till in the silence around him he hears
The muster of men at the barrack door,
The sound of arms, and the tramp of feet,
And the measured tread of the grenadiers
Marching down to their boats on the shore.

Then he climbed to the tower of the church,
Up the wooden stairs, with stealthy tread,
To the belfry-chamber overhead,
And startled the pigeons from their perch
On the sombre rafters, that round him made
Masses and moving shapes of shade,—
By the trembling ladder, steep and tall,
To the highest window in the wall,
Where he paused to listen and look down
A moment on the roofs of the town,
And the moonlight flowing over all.

Beneath, in the churchyard, lay the dead,
In their night-encampment on the hill,
Wrapped in silence so deep and still
That he could hear, like a sentinel’s tread,
The watchful night-wind, as it went
Creeping along from tent to tent,
And seeming to whisper, “All is well!”
A moment only he feels the spell
Of the place and the hour, and the secret dread
Of the lonely belfry and the dead;
For suddenly all his thoughts are bent
On a shadowy something far away,
Where the river widens to meet the bay,—
A line of black, that bends and floats
On the rising tide, like a bridge of boats.

Meanwhile, impatient to mount and ride,
Booted and spurred, with a heavy stride,
On the opposite shore walked Paul Revere.
Now he patted his horse’s side,
Now gazed on the landscape far and near,
Then impetuous stamped the earth,
And turned and tightened his saddle-girth;
But mostly he watched with eager search
The belfry-tower of the old North Church,
As it rose above the graves on the hill,
Lonely and spectral and sombre and still.
And lo! as he looks, on the belfry’s height,
A glimmer, and then a gleam of light!
He springs to the saddle, the bridle he turns,
But lingers and gazes, till full on his sight
A second lamp in the belfry burns!

A hurry of hoofs in a village-street,
A shape in the moonlight, a bulk in the dark,
And beneath from the pebbles, in passing, a spark
Struck out by a steed that flies fearless and fleet:
That was all! And yet, through the gloom and the light,
The fate of a nation was riding that night;
And the spark struck out by that steed, in his flight,
Kindled the land into flame with its heat.

He has left the village and mounted the steep,
And beneath him, tranquil and broad and deep,
Is the Mystic, meeting the ocean tides;
And under the alders, that skirt its edge,
Now soft on the sand, now loud on the ledge,
Is heard the tramp of his steed as he rides.

It was twelve by the village clock
When he crossed the bridge into Medford town.
He heard the crowing of the cock,
And the barking of the farmer’s dog,
And felt the damp of the river-fog,
That rises when the sun goes down.

It was one by the village clock,
When he galloped into Lexington.
He saw the gilded weathercock
Swim in the moonlight as he passed,
And the meeting-house windows, blank and bare,
Gaze at him with a spectral glare,
As if they already stood aghast
At the bloody work they would look upon.

It was two by the village clock,
When he came to the bridge in Concord town.
He heard the bleating of the flock,
And the twitter of birds among the trees,
And felt the breath of the morning breeze
Blowing over the meadows brown.
And one was safe and asleep in his bed
Who at the bridge would be first to fall,
Who that day would be lying dead,
Pierced by a British musket-ball.

You know the rest. In the books you have read,
How the British Regulars fired and fled,—
How the farmers gave them ball for ball,
From behind each fence and farmyard-wall,
Chasing the red-coats down the lane,
Then crossing the fields to emerge again
Under the trees at the turn of the road,
And only pausing to fire and load.

So through the night rode Paul Revere;
And so through the night went his cry of alarm
To every Middlesex village and farm,—
A cry of defiance, and not of fear,
A voice in the darkness, a knock at the door,
And a word that shall echo forevermore!
For, borne on the night-wind of the Past,
Through all our history, to the last,
In the hour of darkness and peril and need,
The people will waken and listen to hear
The hurrying hoof-beats of that steed,
And the midnight message of Paul Revere.

← Mesca Ulad Your Lips Must Touch The Toe →
Back to blog