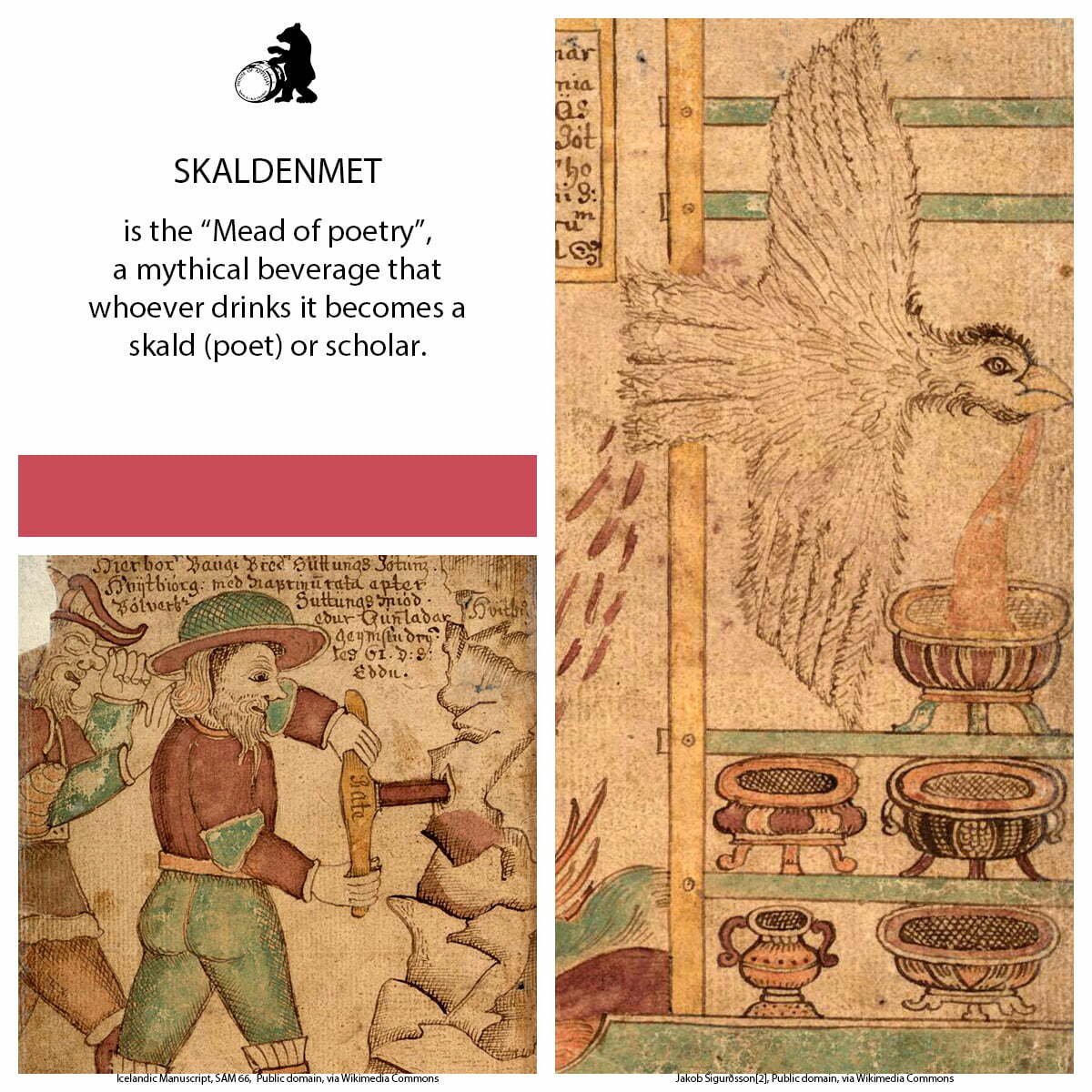 The Skaldenmet (Mead of Poetry, Mead of Suttungr) is a myth from Norse mythology. It is a honey wine that if consumed enables everyone to sing beautiful and write poetry. The most complete information about Skaldenmet is found in the works of Snorri Sturluson in the Skáldskaparmá of the the second part of the Prose Edda.

The legend goes that after the Vanen war all the gods spat into a barrel to seal the peace. (Adding saliva to peace drinks was an integral part of various peoples since the Bronze Age). The exceedingly wise being named Kvasir was born out of this saliva drink which walked among men for many years. One day the two dwarves Fjallarr and Galarr murdered Kvasi and collected its blood. From the blood they brewed with honey a mead that caused anyone that drank it to become a poet and incredibly wise. Time passed, and the two dwarves killed the giant Gillingr and his wife. Suttungr, the giant’s son caught them, and spared the dwarves lives when they offered him the meat of poetry. Suttungr accepted the offer and kept the skaldenmet in Hnitbjörg Mountain, with his daughter Gunnlöð guarding it.

Óðin, one of the principal gods in Norse mythology, was considered the god of poetry, wisdom and also as the steward of the mead. One day he set out to get the skaldenmet. He tricked the giant Baugi’s servants into killing each other, and then worked for Baugi himself as a servant under a different name. He replaced nine servants in his job, and in return he was promised to be given a draft of skaldenmet. Baugi asked his brother Suttungr for some skaldenmet, but Suttungr refused to give him even a drop.

So, Óðin made Baugi to drill a hole in the mountain of Hnitbjörg, through which Óðin slipped in form of a snake. After spending three nights with the giant’s daughter Gunnlöð, she thanked him by giving Óðin three sips of skaldenmet. But he betrayed her and drank three barrels of skaldenmet. Óðin turned into an eagle and flew back to Asgard where he spat the mead into the bowls of the Æsir. According to legend as soon as Suttungr discovered the theft, he too took the shape of an eagle and followed the thief. When he got close to Óðin some of the skaldenmet came out backwards through his anus and not his mouth – and this is drink is called the rhymester’s share (the portion for an inferior poet). But the rest of Suttungur’s mead was safely stored away. Óðin gave it to the Æsir, and occasionally he gives it to those men who are skilled at composing poetry.

The Skaldenmet myth is also mentioned in the poetry of the Hávamál, and in a number of Kenningar, some depicting goes back to the 7th-century Gotland.