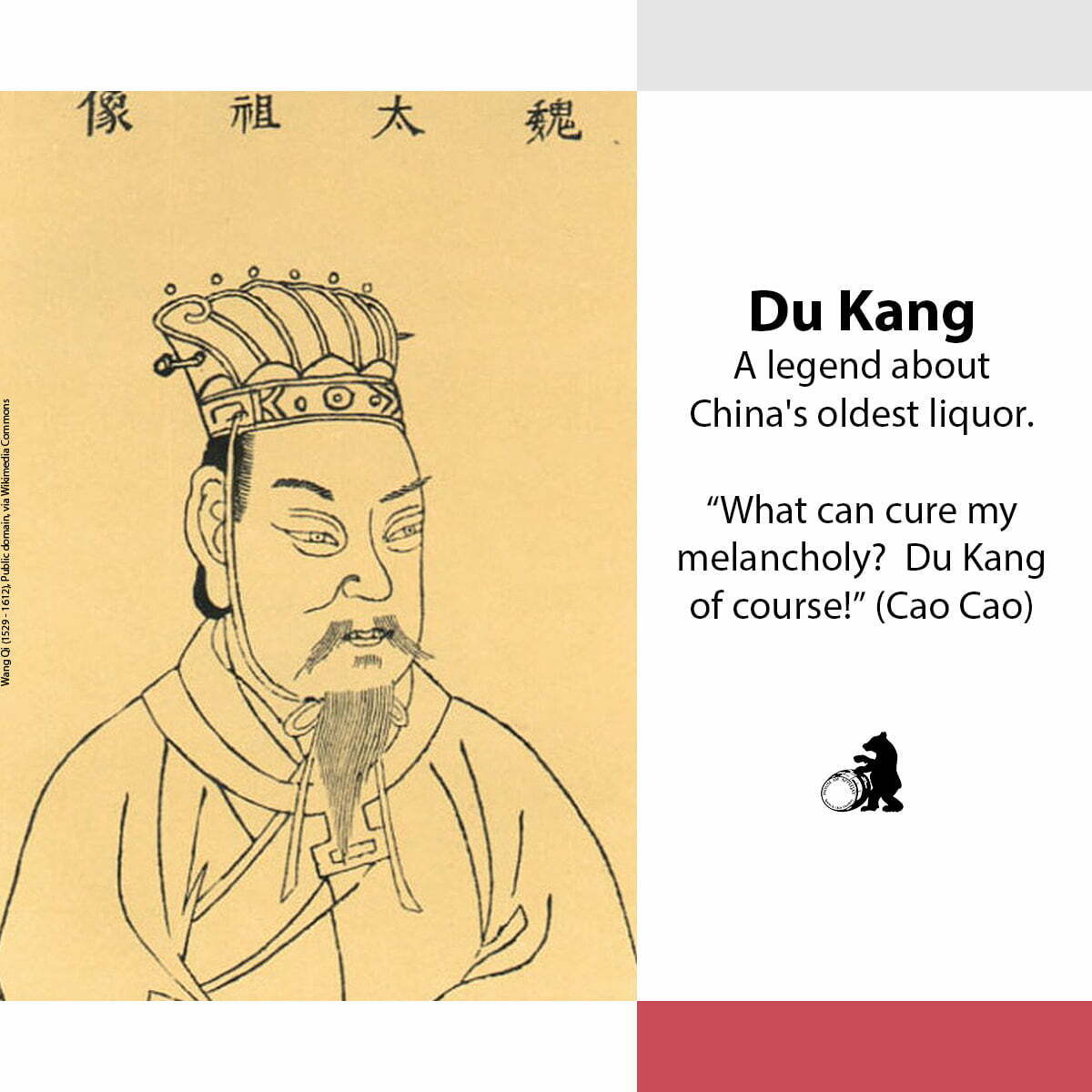 “At sunset I sit in front of my door, a glass in my hand, and I feel like a god” is a Chinese saying depicting the love of Chinese people to enjoy to glass of Báijiǔ alone under the blossoming trees in the moonlight. [Chinese liquor or Báijiǔ (also known as Shāojiǔ) refers to a group of grain-based spirits similar to Korn and Vodka. The term “Báijiǔ” though is not used consistently in the Chinese-speaking world, and is sometimes referring to white wine which makes the interpretation difficult. Báijiǔ is the most drunk spirit in the world. in 2016 more than 10,000 Chinese distilleries produce annually about 13 billion liters Báijiǔ of which most of which was consumed in China itself.]

Following Chinese tradition, the history about the first Báijiǔ maker in the world is best told with its legend:

The story about Du Kang is among the most famous stories, and as many old legends there are different versions about the inventor of Báijiǔ that lived about 3000 years ago. Du Kang was an official of the Zhou Dynasty (1046-256 BC). He liked to drink and after retiring, he returned to his home town. Du Kang improved the sorghum Báijiǔ brewing methods, and he is often named as the liquor originator by the Chinese. His liquor was became a very popular product.

The legend goes that one day Du Kang was visited by a man who was known to be able to drink a lot without getting drunk. He praised the Du Kang’s Báijiǔ and drank large quantities of it. Du Kang though refused payment and said: “You can’t judge the quality of my liquor for three years, so I want you to pay after that.” According to legend the man went home and fell into a very deep sleep for several days and nights. His family thought he died of drinking and buried him. Three years later, Du Kang went to to receive his payment for his Báijiǔ as agreed. The family wanted to arrest him for giving their family member too much to drink. With a smile, Du Kang asked the family to open the tomb, which they did. When the coffin was opened, the drinker sat up and exclaimed, “A great liquor! A really great liquor!” From then on, Du Kang’s Báijiǔ became even more popular and known far and wide.

During the Han Dynasty, (155AD-220AD) the great warlord Cao Cao would be famously quoted singing, “What can cure my melancholy?  Du Kang of course!”.  Today, this quote is often at display in many Chinese bars and restaurant reminding guests of Chinese tradition,  hospitality, and that quality needs time.

← All About Drinking Songs Quaich - Traditional Scottish Cups →
Back to blog